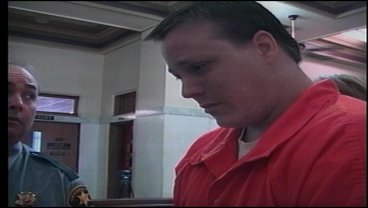 Now to a murder case out of Carter County. A Lone Grove man, accused of killing his own mother, went to trial Monday morning and spoke-out about the case to our own Meredith Saldana who has more on this story.

Lee Purser's mother was found murdered in her home in June of 2007 off of Meridian in Lone Grove.

Purser had co-operated with police and turned over his clothing after saying he hadn't been in his mother's house that day.

But DNA results later came back and identified blood on his shoes as being his mothers.

Purser was arrested over a year later, in November of 2008, for first degree murder and has been held at the Carter County Jail on a $2-million bond.

Monday, was Purser's first day of his trial.

Though, no jury was present.

District Judge Tom Walker, who granted the request, heard the trial in his court, Monday.

We caught up with Lee Purser Monday afternoon and asked him how he felt the trial was going.

Then became emotional as he talked about the toll the trial is taking on him.

"It's been hard for a long time," says Purser.  "I just ask that maybe God embrace me and my family until we get through this."

Because Purser waived his rights to a 12 person Carter County jury, District Judge Tom Walker will ultimately decide whether Purser is found guilty or innocent.

District Attorney Craig Ladd told us Monday around 5 PM that he expected the case to be wrapped up Monday evening.

We'll keep you updated with the latest information on this trial.