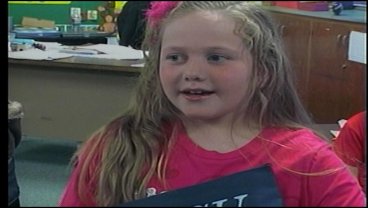 Right here in Oklahoma, a young 7-year-old girl decided she wanted to make a difference for the folks in Haiti. She started a fundraiser for the Red Cross.  Her goal, $1,000, but she accomplished so much more. Meredith Saldana has her story.

Maggi Dansby, 7, says she saw the images of the devastation in Haiti and wanted to help.

"The people that were injured, I felt really bad for them and then I started this little campaign."

Maggi started her fundraising last week, asking her friends to donate ten cents or more each, whatever they could do.

It doesn't sound like much, but it added up quickly.

Maggi's idea, "Well, lets just say a little money can do anything."

While it may seem surprising that a 7 year old, like Maggi, could set a goal of one thousand dollars and exceed that goal in just one week, those who know her best say it's no surprise at all.

Kristi Smith, Maggi's teacher says, "No, it does not surprise me that Maggi would think of this. She's probably one of the most empathetic students I've ever had. Plus, she enjoys learning about other countries, so the minute there was another country involved she was gung ho and ready to go."

Maggi's mom, Ashley Dansby, says, "Maggi has always been very thoughtful. She feels for anybody, she's always giving something to somebody and wanting to help in any way she can. She'd asked for a shoe box and I had no clue why she needed a shoe box and she got right to work. She started a list you know, okay I'm gonna tell them if they want to yes, if they don't no and had our phone number and everything on this list and she took it to school and it took off!"

And such a giving personality like Maggi's seems to rub off on those around her.

She says it was one of her dearest friends who put the first donation in her shoe box.

Kervon James, Maggi's friend, says, "So I felt bad and I gave all my ice cream money to them."

And the high school DECA students who helped Maggi total up her donations say they won't stop here and neither should you.

"We'll continue to collect but you can send your money to the Red Cross."

Her mother says, she's so proud of her little girl.

"I think the potential is endless. If somebody's sick in her class she makes get well cards. She's one of a kind."