Ada Stray Will Appear on Broadway 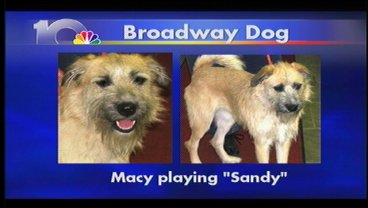 It's a story that will just make you smile! A stray dog in Ada, starving and picked up on the streets, has packed her bags and moved to New York to star on Broadway! Meredith Saldana has more on this tailwaggin' story.

Employees at the Ada Animal Shelter say little Macy was overlooked by families searching for a new dog, for months.

But, she managed to catch the eye of a famous Broadway animal handler in New York City!

Her name is Macy.

After spending months in the Ada Animal Shelter she was invited to participate in a training program called Pen Pal's.

After graduating from the program, she was the only dog scheduled to return to the shelter.

So a woman in Newcastle decided to foster her.

And thanks to the Internet, animal handler, Bill Berloni found his next shaggy star!

Employees at the Ada Animal Shelter says Berloni called and said he wanted to fly in from New York and meet little Macy.

Once he met her he decided he had to have her.

Sue Thompson, a board member at PAWS, says they had no idea their little stray had so much potential!

"Oh, heaven's no! None of us would ever think of that," says Thompson.  "We knew she was a darling dog, who deserved a good home and she just got overlooked because she was kind of a plain dog."

Bill Berloni has been featured on numerous talk shows and in many magazines.

His animals have worked on Broadway productions like Legally Blonde, The Wiz and Annie Get Your Gun.

As well as movies like Charlie Wilson's War and The Producers.

The dates for the new Annie production haven't been released yet.

Macy will be preparing for her role, in the mean time!