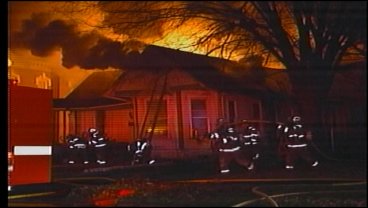 DENISON, TX - A downtown Denison home is destroyed by flames.

Firefighters responded to a home in the 100 block of West Sears around 6:30 p.m. Sunday. When crews arrived smoke was billowing out of the home, and flames quickly wrapped the roof.

Neighbors tell us a family lives in the older home, but was gone when the fire broke out. A few surrounding neighbors were evacuated. All they could do was watch and wait. There was concern the growing flames could jump to other nearby homes.

"I'm worried about everything - my niece, my house, my place to live, everything," said Ray Krueger, who lives next door to the burning home. Krueger and his young niece were forced outside their home by firefighters who were concerned their home could catch fire, too.

Denison crews stayed on scene for more than four hours, putting out hot spots and investigating. No word yet on what started the fire.