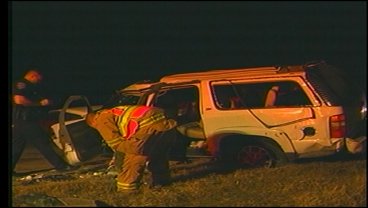 GRAYSON COUNTY, TX -- Thursday night a teenager rolled his car because he was texting while driving. Before that, a fatal crash on highway 82 shook up the community. Police say alcohol was a factor. Now, as Deeda Payton reports, law enforcement is stepping up their efforts to educate teens on driving safety.

Thursday night we told you about a rollover accident that shut down highway 75 in Sherman. The cause of the accident? Police say a teenager was texting on his cell phone while driving and lost control.

Then earlier this month, a crash on highway 82 in Sherman killed two Grayson County teenagers, and injured another. The cause of that accident? Alcohol and speed. Now, law enforcement are using these accidents to educate teen drivers on the power of distraction and the consequences that can follow.

Three years ago, Pottsboro started a campaign called 'Less Tears More Years' to promote safe driving for teenagers. "They don't have the experience or knowledge as we do as adults. Then you mix passengers, texting on top of that, cell phone use and alcohol which obviously impairs your judgement at any age," said Pottsboro Police Chief, Brett Arterburn.

"I don't think they realize the responsibility that comes with driving and that's why 'Less Tears More Years' is a good thing," said Whitesboro Police Chief, Scott Taylor. The less tears more years campaign was started in Pottsboro because of the high number teenage fatality accidents that were happening in 2007.

Now, with the use of cell phones and other distractions, police say this campaign is more relevant than ever before.