Major Construction on I-35 in Ardmore - KTEN.com - Texoma news, weather and sports

Major Construction on I-35 in Ardmore 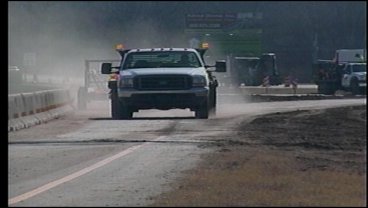 If you've been to Ardmore recently, you probably noticed the massive construction going on on Interstate 35! Meredith Saldana met with the Oklahoma Department of Transportation to find out exactly what you can expect.

The construction will cost about $20-million.

And if it runs on schedule, you can expect it to be there for another 10 months.

Interstate 35 in Ardmore is known as the corridor that connects Dallas to Oklahoma City and the constant flow of traffic seems to be more than just a headache.

It's caused continuous wear on the 40-year old interstate.

Mark Zishka with the Oklahoma Department of Transportation says, "The average daily traffic is generally around 30,000 vehicles per day. On a holiday weekend or OU/Texas we might get the upwards of 70,000 vehicles a day."

The construction project is to completely redo a 2-and-a-half mile stretch of interstate from just south of mile marker 29, to mile marker 31.

It's the first time construction like this has taken place on this stretch of interstate since it was built 40-years ago.

And it's sure to cause some delays.

In fact, beginning Monday, all I-35 traffic will be moved to the north bound lanes.

"We'll have one lane of traffic pretty much until probably the end of September hopefully, says Zishka. "It may go past that just depending on what the weather does."

And part of this project includes tearing down the bridges over Myall road.

"The bridges are probably gonna be the most difficult part to build because they're a little bit different than what a contractor normally deals with."

The new bridges are expected to be about 5 feet taller than the original ones.

The entire project is expected to be complete by OU-Texas weekend, in early October.

But just how long will this new section of interstate last?

"The original interstate was designed at 20 years and was put in in the 70's. We're approaching 40 years on it," says Zishka.  "So it should last beyond it's 30 year design life depending upon what the traffic needs are in the future."

During this construction, keep in mind that the speed limit has dropped in some areas.

Just remember that traffic fines double when workers are out there on the interstate.