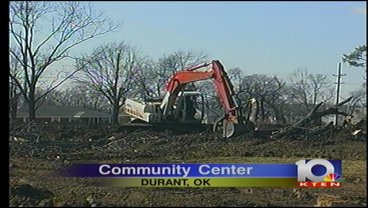 DURANT, OK -- A big project is underway in Durant. Construction has started on the city's new $8 million dollar community center and library. Deeda Payton spoke to the assistant city manager about the project and it's value in the community.

The project is actually ahead of schedule and the nice weather we're having could bump up the expected completion date.

Construction crews were hard at work Thursday taking advantage of the nice weather. Cranes and bulldozers are clearing the land, relocating utility and power lines, so they can start the foundation of the 30,000 sq. ft. Building.

The facility is privately funded by the Donald W. Reynolds Foundation. It is being touted as the nicest public facility in southern Oklahoma. As Assistant City Manager, Ralph Houser, explains "There'll be some new jobs created because it's obviously three times bigger than our current facility. There'll be other benefits whether it be citizens coming to use the library or businesses coming to use the new meeting room space that we have."

You can see the artist renderings of the new Donald W. Reynolds Community Center and Library on Durant's web site at www.durant.org.

The facility will include large meeting rooms, computer labs, a black box theater and two-thirds of the building is library space.

They are expecting the community center to be complete in a year.