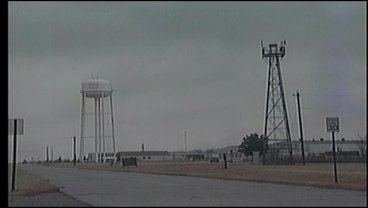 DURANT, OK -- If a tornado or other natural disaster strikes in the future, the City of Durant and Bryan County want to set up a regional emergency operations center.  KTEN's Chris Severy reports.

Emergency officials in Bryan County are targeting a million dollars from the feds to build a proposed emergency operations center.  Wednesday, the Durant City Council approved a homeland security grant application for construction of the emergency operations center.  They plan to ask the federal government for $1million.  The emergency operations center would be built at Eaker Field in Durant.  But in order to do that, improvements would need to be made to the water, sewer and streets at the airport including a special access road.  Durant and Bryan County Emergency Management Director James Dalton says this project is vital for the safety and well-being of people in southeast Oklahoma.  "If we can set up a regional EOC down here in the event of a natural or man-made disaster then we would have a way to bring all the principal players together into one room where we could better handle the situation," he said.  In addition to the federal grant, the City of Durant would also chip in more than $600K in what they call matching funds.  Officials there plan to have the application submitted by this Friday.  Then it's wait and see on a decision from the Department of Homeland Security.