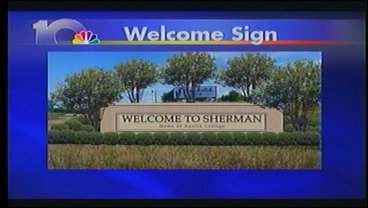 GRAYSON COUNTY, TX -- There seems to be a friendly welcome sign war in Texoma. First there was the Battle of the Ax. Now Denison and Sherman are taking the competition between the cities to the highway. Deeda Payton spoke to the respective cities about the progress they are making.

Both cities have been working on their signs for more than a year and soon they will be ready to show them off. Sherman plans to finish theirs first, but Denison says in the end they will have two welcome signs total. So, at this point it's really anyone's game.

Sherman's new welcome sign is located near the intersection of FM 1417 and highway 75. You can't miss it if you are driving in from the south.

Denison's new sign is also off of highway 75, but it's at the intersection of 691 positioned right in front of the new Texoma Medical Center. Right now, it's just stacks of bricks, but by the end of march, the Denison Chamber expects it to turn heads. "Our new sign is going to be spectacular. It's going to say what Denison once said, we are a great city and enjoy," said Anna McKinney, Denison Chamber of Commerce President.

"That first impression is really a good thing for businesses coming in, visitors coming in, and even the people who live here and I think it's going to accomplish that," said Traci Carlson, Sherman Chamber of Commerce President.

As for Denison's existing sign on Spur 503, it will be moved to the north end of town to welcome motorists coming from Oklahoma.