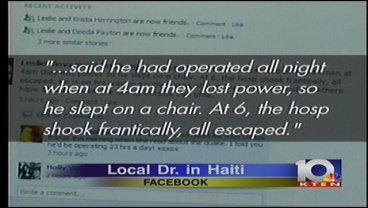 DURANT, OK -- Since the first quake hit Haiti, we have been following up with local doctors who are traveling to the island to help. Tuesday, we told you about a Durant surgeon who has been treating patients outside Port-au-Prince. Deeda Payton reports on how he is doing since the second quake or aftershock shook Haiti Wednesday morning.

Doctor Peter Hedberg is communicating with his family in Durant through Facebook, but this morning he was able to call his family through a computer line. He assured them he was ok.

His wife, Leslie, has been updating friends and family via Facebook on Peter since he left Saturday. This morning she wrote "Pete called! said he had operated all night when at four a.m. they lost power so he slept on a chair. At six, the hospital shook frantically, all escaped. He is on his way to another area of Port-au-Prince. He and the others have decided to set the or up outside this time." Dr. Hedberg is planning to come back this weekend.

Just as he will be leaving Haiti this weekend, another local doctor is booking flights to take a group to Haiti. We spoke with Dr. Jeannine Hatt, a Denison Pediatrician, last week about past medical mission trips to the island nation.

Wednesday, we asked her about her efforts to get to Haiti to help earthquake victims. "I want to keep this group small because we aren't really sure what the situation is going to be and we just want a small initial team of four to seven people."

Dr. Hatt works with Grace Childrens Hospital in Port-au-Prince. If you would like to help her organization you can visit www.icc.org.

Also, the Texoma Chapter of the Red Cross is also collecting donations to send to Haiti. About $20,000 has been donated locally.