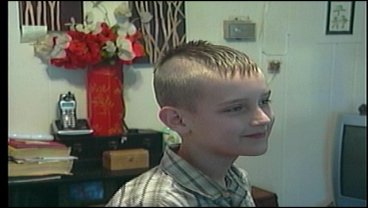 Just after 8am Tuesday morning, the Principal at Crutchfield Elementary called Kammi Travis and said she needed to come pick up her son from school.  Here is the reason why.  This is Brandon Travis, Jr.  He's a fourth grader and it's his mohawk hairstyle that drew the attention of school officials.  They decided his hairstyle was causing a distraction at school.  So he was sent to the office until his mom, Kammi, could pick him up.  She said, "He's supposed to have his hair cut all the way off before he can go back.  So, I don't know what we're going to do right now.  I don't know if we're going to cut it off or try and challenge it.  I don't feel like he should have to cut his hair to go to school.  I don't feel like it's distracting."  In a statement issued to KTEN, Sherman ISD Public Information Officer Bootie Terrell said quote, "...the high school, middle school and intermediate school have specific policies about mohawks.  At the elementary level, the discretion is left up to the principal and whether it's deemed a distraction for students."