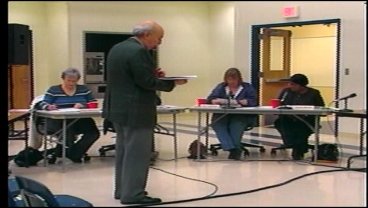 The Ardmore School District discussed the drastic budget cuts at Tuesday night's board meeting.  Meredith Saldana was there and has more on this story.

Many possible ideas were tossed around at the meeting but the only decision that was made was to form the Budget Planning Committee for next school year.

And, just hope the state coughs up more money.

The meeting seemed quite somber as Superintendent Dr. Ruth Ann Carr discussed the seriousness of the budget cuts affecting the Ardmore School District.

But she did say the new Budget Planning Committee will give them a fresh, outside look, into ideas and ways to cut back spending.

She says departments, like athletics, have been asked to cut back as well.

"Well, one of the things that Dr. Wright has asked our athletic department to do is to see if there's any way to reduce any games, any trips that have to travel, so that we're conserving fuel," says Dr. Carr.

"We're going to attempt to, at least for 1 to 2 years, not require them to get the new text books and use that money," says Buck.  "Books are expensive and if they can use that money on a yearly basis, that they were gonna use for text books, for their operational expenses."

Something Dr. Carr says will help, but seems to be pennies in this budget crisis.

As for what our local legislators are doing to help our area districts through this crisis?

Representative Buck says they will try to use the stimulus money.

"We have about $600-million in stimulus money as well," says Representative Buck.  "And we will be using that along with the rainy day fund. That stimulus money, a lot of it's ear marked that has to go towards education. And people say well, what about other people besides education? Well, what that will allow us to do is use that money for education and then hopefully use other money to fill in gaps on other budgets.  That's what we'll be attempting to do."

We did have several viewers ask about the money the state department of education is supposed to receive from the sales of lottery tickets, Representative Buck says they are still receiving that money but lottery sales have been down as well.