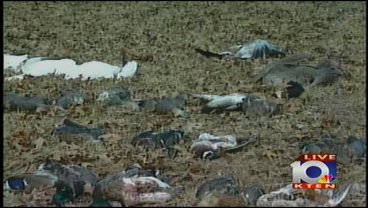 DENISON, TX -- Dozens of ducks and other birds were found shot to death at Loy Lake Park in Denison.  Grayson County officials were made aware of the discovery late this morning.  KTEN's Chris Severy has the details.

Thirty-four birds in all, mostly ducks and at least one goose at Loy Lake Park.  Grayson County environmental Deputy Jim White got here around eleven this morning and found the ducks and at least one goose piled up along the brush line back there.  He brought them out and sorted them based on species.  It's still early in the investigation, but the sheriff's office does have a report of someone firing a .22-calibre gun in the park late last night.  If you have information about this case, call the Texas Game Wardens at 1-800-792-GAME, that's 4263.  It's their operation game thief hotline.  It's kind of like crimestoppers for wildlife violations and you could get a reward.