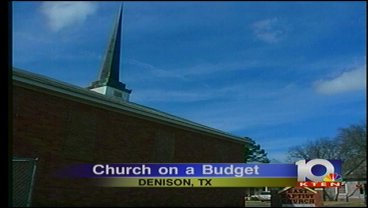 DENISON, TX -- Some of our local churches are now starting to feel the economic pinch along with churches across the country. Deeda Payton spoke to the pastor of the East Baptist Church in Denison about their financial worries.

Pastor Brett Castle says the last six months have really been brutal. He says many of his congregates have lost jobs and are struggling which is causing the church to struggle.

Pastor Castle says his congregates are still tithing but can not give very much to the church. He says many are asking the church for help, and his offerings are down about 60%. In the past, the church would bring in about $3,000 a week. Recently, they had the lowest Sunday offering they have had in years at just $600.

If things don't turn around soon, Pastor Castle says, they may have to start closing parts of the church because of electricity bills. "Worry, if I could sum up what the congregation is doing right now is worry on all levels."

East Baptist Church has already cut back on its employees' hours and pay. They are no longer donating to the Red Cross and other local organizations because of lack of funds. Castle says they can't even afford to hold a blood bank at the church because of electric bills.

When asked if they run the risk of closing, Pastor Castle said no, but he says he is worried. He is worried about the church and his congregates.