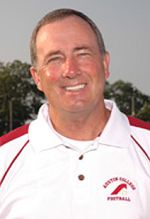 After four seasons at the helm for the Kangaroo football team, Gage accepted the same position at Barbers Hill ISD, a class 4A Texas school near the Houston area. He will also serve as that school's athletic director.

Gage came to Austin College prior to the 2006 season and the 'Roos led the Southern Collegiate Athletic Conference in rushing each of the four years.  Austin College also finished among the top rushing teams in NCAA Division III every year over that span.

Austin College officials thanked Gage for his service and for helping move the football program in a new direction.

"We are thankful for the time that we had Ronnie Gage as our head football coach," said Vice President for Student Affairs and Athletics Tim Millerick.  "He was instrumental in moving the program to a new, improved level of competition as we transitioned to the Southern Collegiate Athletic Conference."

Under Gage, the 'Roos posted an overall record of 17-22, including a 9-17 mark against SCAC competition.  In four years, Gage coached 40 players to All-Conference honors, and in his first three seasons, 43 of his student-athletes were named to the SCAC Academic Honor Roll.  This year's Academic Honor Roll has not yet been announced.

"As I understand it, this move is a very good one for Ronnie and his family," said Millerick.  "On behalf of the entire Austin College community and in particular those associated with the athletics family, I thank Ronnie for the effort he put forth here and wish him all of the best."

Before coming to Austin College, Gage was a two-time Texas 5A State Championship coach at Lewisville High School, compiling a career record of 137-60-9 in his 18-year high school coaching career.  His teams won five district championships over that span.  Gage also formerly served as the president of the Texas High School Coaches Association, and in 2009 was inducted into the THSCA Hall of Honor in recognition of his accomplishments.

Austin College athletic teams participate as a member of the NCAA, Division III, and the Southern Collegiate Athletic Conference.