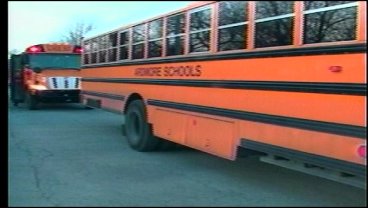 ARDMORE, OK - Cuts made by the state of Oklahoma's Department of Education have rocked school districts across the state. On Friday afternoon KTEN News learned layoffs could be in the near future for Ardmore city schools. Meredith Saldana has the story.

The state announced last month that the state aid would be cut about five percent, but Ardmore Superintendent Dr. Ruth Ann Carr says budget cuts are totaling much more.

"You know we've been getting notices throughout the year that we are being cut," said Dr. Carr. "You know it started off at 2.75% and then it went to 5%. Well now it's been annualized to 10% and so that means that they've gone back and taken money that we thought we had in August and December."

About 15 percent of Ardmore's total budget is for bills like electricity, fuel or busses and insurance. The remaining 85 percent goes to salaries, leaving Ardmore with very few options.

"We know that we will have to cut positions before next year," said Dr. Carr.

Now parents are left wondering what this means for their child's education.

"They need more one on one and you know I just don't think it's a good idea," said parent Tricia Howard.

"Instead of laying off the teachers they should cut other sources," said another concerned parent.

Dr. Carr says the district understands the state of Oklahoma is in a financial crisis. She says the Ardmore schools will do everything they can to maintain the quality of their schools and realizes the importance of smaller classes and more teachers, but says the unexpected cuts have left the district with little choice.