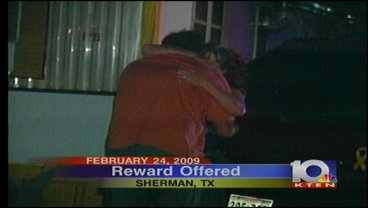 SHERMAN, TX -- It's been almost one year since a Sherman woman was shot and killed at a trailer park off Texoma Parkway. Still, one year later, there is very little information surrounding the death of Latisha Colson. Deeda Payton reports that Sherman police are announcing a reward to help crack the case.

Sherman police won't give an amount, but say the reward is substantial.  they hope that it will motivate someone to come forward with information that would lead to an arrest.

Latisha Colson is a mother, sister and daughter. Her death has puzzled family, neighbors and even police. On February 24, 2009, she was shot in the neck at Crossroads Mobile Home Park.

Neighbors told us at the time that there were witnesses, yet police say they have no leads and no one has come forward. So, with the one year anniversary of Colson's death approaching, Sherman police are offering a reward. They hope the money will spark some information. "It's a real easy thing to think of a victim as a victim, what we want to remind people is that Latisha Colson was not just a victim, she was a mother, sister and daughter and we know someone out there knows something," said Sgt. Bruce Dawsey.

If you have any information about the shooting, you are asked to call Sherman police at 903-892-7290