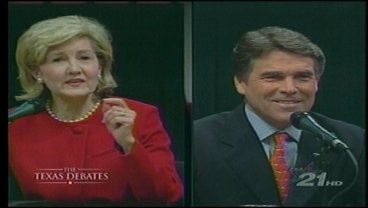 DENTON, TX -- It was the first debate in the race for Texas governor.  The three candidates vying for the Republican nomination squared off in Denton at The University of North Texas.  KTEN's Chris Severy watched the debate from start to finish and has this report.

The debate mixed frivolity with pointed jabs, and yes, even some substance.  From taxes to transportation, Governor Rick Perry faced Senator Kay Bailey Hutchison and Debra Medina in the first debate before the march Republican primary.

From the beginning, it looked like a case of two against one.  Gov. Perry getting attacked by Sen. Hutchison and Debra Medina.  But that's what happens when you're the incumbent.  The biggest point of contention all night?  Taxes.

Sen Hutchison, "You were supposed to lower property taxes and you didn't."

Gov. Perry, "By one third, 16-something billion dollars.

Sen Hutchison, "You did not.  You knew you couldn't control the appraisals and the taxes did not go down.  They didn't."

Debra Medina, "I think Texas is ready for some leadership and this squabbling isn't getting us anywhere."

Perry at times showed frustration with his two opponents.

Gov. Perry, "It really wears me out that we got two people on the stage here that want to tear Texas down when the fact is everyone understands this is the state you wanna live in."

Arguing, bickering, taxes, transportation and trade.  At least all three candidates found some time to share a good laugh.

Gov. Perry, "Are you gonna resign from the United States Senate?"

Moderator, "Governor, actually you're supposed to pose your question to Ms. Medina."

Debra Medina, "I'm not going to resign from the Senate."

The primary election is coming up on March 2nd.  And let's not forget those running for the democratic nomination.  The two most well-known being former Houston Mayor Bill White and businessman Farouk Shami.