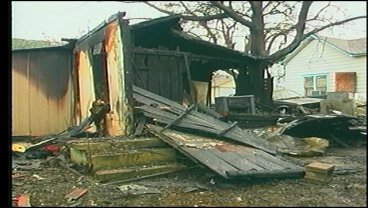 DENISON, TX -- There have been several across Texoma in recent days, including one on Wednesday that destroyed a mobile home in Gunter.  Some homeowners have lost everything.  But there is help available.  KTEN's Chris Severy reports.

Edward Houillion lost everything Wednesday when his house burned to the ground.  Thursday, he showed up at the Texoma Chapter of the American Red Cross in Denison to get some help.  Gusty winds fueled the flames that also scorched dozens of acres.  By the time firefighters were able to put it out, Edward was left with no place to go.  Houillion said, "There's people out there who probably need it worse than I do.  But they have been great, given me a hotel room for a couple of nights to get situated again before I can actually find another place to live."  Texoma Chapter of the American Red Cross Executive Director Sharon Watson added, "The local Red Cross always needs money.  So, we ask people to give form the heart to the cause that they feel best."  To help, send a check to the American Red Cross at 2527 State Hwy 691, Denison, TX 75020.  You can also drop off donations at that address.