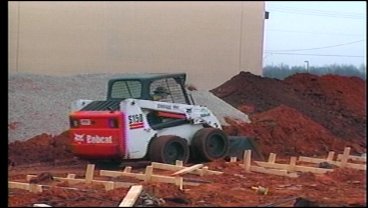 It hasn't even been announced yet, but, several new businesses are planned for the Ardmore Commons development.

And we're talking about a children's clothing store and two new restaurants, all expected to open this summer!

Construction workers are using heavy equipment to move the dirt around for what will be several new businesses.

As work continues on the foundation, people from the area are anticipating the new businesses as another reason to come to Ardmore to shop.

Sulphur resident, Dan Lyle, says, "Well, I come here for stores that we don't have down at Sulphur. Like the pet store and the home depot type place."

The new stores set to open are, The Children's Place clothing store and restaurants, Rib Crib barbeque and CiCi's Pizza.

Lone Grove resident, Jonathan Bright, says, " I think children's clothing store will be great. We don't have a lot of children's stores here so more clothes for the kids, that's better."

And what some find surprising, is this construction and new business comes during such a volatile economic time.

"I think it's a little surprising, but it's good that they can bring people in and I think that this is a good location.  Here, near the freeway and between a number of towns," says Lyle.  "So, I think the more the better."

And it's always good to have new places to shop.

"I think it's good! I'm tired of the same old businesses," says Bright.

The Assistant Manager of RUE 21, Melanie Welch, says, "I hear we're going to be getting lots of new restaurants and children's clothing which is nice, because people always ask us if we have children's clothing here. So, it will definitely help out a lot.  I think just having new business around and bringing lots more people will help!"

"We need a lot more restaurants. Same old ones are getting boring to eat at," adds Bright.

And the location here at the Ardmore Commons makes it convenient for people from all over the region.

Welch says, "Seeing that we're gonna be having more restaurants come closer, people who are traveling, it's gonna be near the interstate so more people will hopefully stop. They'll be able to eat and shop and be more comfortable than in most towns."

The developer estimates that these new businesses will bring in about 125 new jobs when they open later this year.

If you have a story idea in our area you'd like to tell me about, email me at msaldana@kten.com.