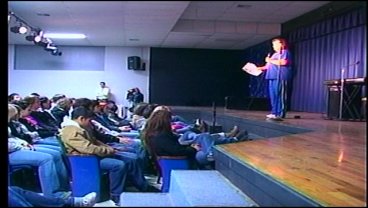 Dickson school is hoping to put an end to drug use through a new program their calling "Meth to Mercy".

A Dickson senior was the main speaker for the program.  Justin Smith spoke in front of hundreds of his high school classmates about his mother's personal struggle with methamphetamine.  During his mother's struggle, he told his classmates about his struggle for happiness at home from thoughts of suicide to missing his siblings after they were taken by the Department of Human Services.  Another senior, Ashley Powell says she has seen loved ones struggle with addition and says this program is exactly what many of the schools young people needed to hear.

Kathy Smith, Justin's mother, was released from the correctional facility 1 1/2 years ago. She says every day is a battle to stay clean, but she continues to fight because of her love for her family.