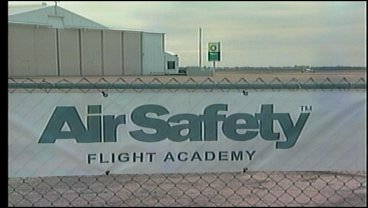 The students are in a state of shock, after word came via email Tuesday that the school is now closed.  A sign on the fence is about the only way a person would know where Air Flight Safety Academy was at North Texas Regional Airport.  Wednesday, it was a ghost town.  It has been since the school suspended operations effective this last Sunday.  Flight academy students we talked to have more questions than answers.  They say they've tried to contact the school, but so far have not gotten a response.  Right now they're just spending their days milling around the dorm, mad, frustrated, confused and trying to figure out what to do now.  Student Steve Tanai said, "Something fishy is going on here.  They owe lots of money to the students and they even took money last Friday and they shut down the school on Sunday."  In a press release, the school says it hopes the closure is only temporary.  The same release cited financial woes and mounting debt for the suspension of operations.