An Eighth Grader Brings a Loaded Gun to School 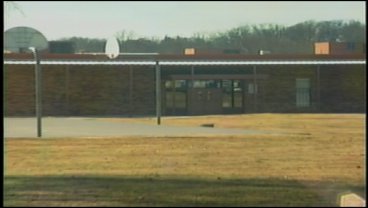 DENISON, TX-- We brought it to first on KTEN News Midday. It's a shocking story coming out of Denison. A student at B. McDaniel Middle School reportedly brings a loaded 9 mm handgun to class. Deeda Payton reports.

The student who reportedly brought the gun is in the eighth grade at B. McDaniel. He is 14-years-old. His name is being withheld because he is a minor.

The school which doesn't allow backpacks says he brought the loaded 9 mm handgun to school in an athletic bag yesterday. In the school's statement, they say there is no evidence that the student brought the gun to harm anyone, but rather to show it off.

According to Denison Police, the student is now in the juvenile detention center facing third degree felony charges for bringing the weapon onto school property. The school punishment for bringing a gun to school is immediate and automatic placement in the districts disciplinary alternative education program or DAEP for at least one year which is on a separate campus.

The following is a letter that was sent out to parents after recent events involving an 8th grade middle school student who brought a handgun onto school grounds at B. McDaniel Middle School in Denison, TX.

As you may already know, one of our eighth grade students, a male, was apprehended and turned over to Denison police authorities on Tuesday for having a handgun in his possession on school grounds. As we all know, this is a very serious violation of state and federal law, one which continues to be investigated by myself and other school officials as well as our local police department. Please know that we dealt with this situation swiftly and in accordance with all the stringent measures we have in place to safeguard all our students and staff. At this time, it continues to appear that students and/or staff were not targeted or threatened at any time, but that the incident was rather a "show-off" antic on the part of the alleged student offender.

As you are aware, we do not allow any backpacks on our campus at any time, a precaution against concealed weapons of any kind being brought to school. Unfortunately, in this case, the weapon was evidently concealed in an athletic bag. Again, I reiterate that all evidence indicates that the gun was NOT brought to school with the intent to attack other students or teachers. However, this student made a very serious and poor choice in action, necessitating swift and severe punishment according to school safety rules. The school punishment for this offense is immediate and automatic placement of the student in the district's Disciplinary Alternative Education Program (DAEP), which is housed in a secure, well-monitored and separate campus with tight surveillance, for a one-year period, or longer if officials deem appropriate. School officials on the DAEP campus do have a wand, which can be used at any time to ensure that no weapons are in the possession of any students at any time.

B. McDaniel does have surveillance cameras in place to safeguard our students and staff, and we will continue to monitor them closely at all times to ensure student safety to the very best of our abilities. We will also continue to encourage our students to immediately report to school officials any weapon possessions or illegal activity by any students on our campus. I am very proud and grateful that several of our students came to us and reported this very serious infraction when they became aware of the situation. In addition, our staff continually monitors the activities of all students, at all times, as closely as possible. Additional safeguards also include teaming our students, so that all students remain segregated from upper/lower students by grade levels. (All sixth graders enter and leave school via the north entrance, eat lunch together, attend classes in the same halls together. The same applies to separate entrances, exits, lunch periods and halls for seventh and eighth graders). This system allows our teachers and staff to more closely monitor and know their particular students. In addition, we ask that you, as parents, monitor the actions and possessions of your children as closely as possible. Together, as a team, we can assure our students of the safest learning environment possible.

If you have questions, please feel free to call or e-mail me. Again, please know that student safety is our number one priority, and we will continue to do everything in our power to keep your children safe and secure.

As always, thank you for your patience, understanding and cooperation.