The Day After an Explosion at LW Environmental Services - KTEN.com - Texoma news, weather and sports

The Day After an Explosion at LW Environmental Services 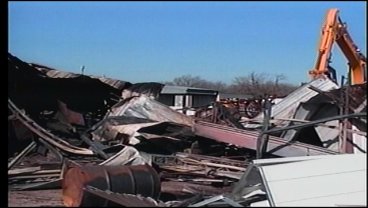 It was breaking news Monday night, an explosion at LW Environmental Services in Wilson, Oklahoma.  Tuesday, Meredith Saldana met with the owners and has more on their story.

The vice president of the company tells me surprisingly none of their propane tanks exploded.

Right now they think it may have been a gas leak that caused the shop to explode.

Michelle Whatley lives about a mile from the site of Monday night's explosion, but it felt like it was much closer.

Whatley says, "We were sitting at the dinner table fixing to eat dinner and we heard an explosion and our windows and house shook!"

And Tuesday morning, more shock to those who depend on this company for a living.

Bradley Golden, of Finish Line Hydraulics in Kingston, showed up for a job at LW to find the shop in pieces.

Golden says, "I had goose bumps and you know it's devastating I mean when you have a customer who's lost a shop like this."

But employees put the devastation aside and started the first step to get back on their feet, cleaning up.

The company's Vice President Chris Watkins, says there were two 250-gallon propane tanks on the back of the hot oil truck in the shop.

In fact, they couldn't find a single canister of any kind that exploded.

And while they're not sure exactly how much financial damage was done, Watkins says nothing in that shop was as valuable as the lives of his employees.

And they're lucky, the last employee left about 15 minutes before the explosion.

As for plans to rebuild?

Watkins says, "Yeah, we'll probably rebuild.  We don't know exactly where or how yet.  We're going to assess the damage and see what we need to do."

He also says he's very thankful and proud of all of the fire departments that showed up to help Monday night.