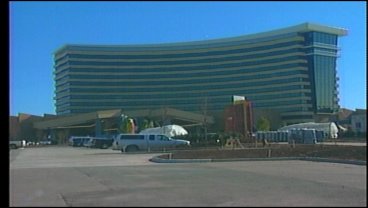 DURANT, OK -- The grand opening of the new Choctaw Casino Hotel and Resort is just around the corner, it's February 9th. While construction crews work on last minute details, new employees are already in training. Deeda Payton reports on the finishing touches.

The new hotel is now the tallest building, by far, in Durant. In three weeks it will welcome its first guests. It is already taking reservations.

It's called the Choctaw Casino, Hotel and Resort. It's not only a mouthful, it's eye candy from highway 69/75. The resort has already hired 900 new employees and are still looking to fill a few positions.

Here's the facts: this new hotel is twelve stories high and has 330 hotel rooms. It cost more than $200 million to build and it took more than five years of planning.

In about three weeks, all the years of planning and months of constructions will be shown off at Choctaw's grand opening. "The last few things are the final touches. They're setting up the actual landscaping and they're working on the waterfall."

In addition to a hotel and casino, the Choctaw Resort will feature upscale restaurants and both an outdoor and indoor pool.