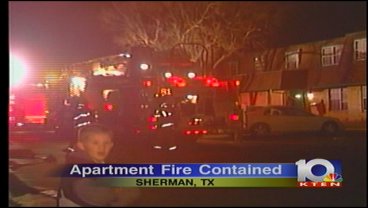 SHERMAN, TX - A family of three are without a home Monday after a fire damaged their apartment.

Sherman Fire Chief J. J. Jones says a fire broke out at the Normandy Manor Apartments just before 6 p.m. Monday. Crews arrived quickly and the fire was contain to just one unit. The Red Cross is now stepping in to help the family that was affected.

Jones said the fire broke out in a bathroom, but quick thinking by the apartment's maintenance director helped keep the fire from spreading.

"The maintenance director was able to put most of the fire out prior to our arrival, so we're just kind of cleaning up," said Jones. "Again no injuries, and a damage estimate has not been set. At this point we're looking at the fire as being accidental."

A mother and two children were displaced by the fire. We're told they have found them a place to stay for the night.