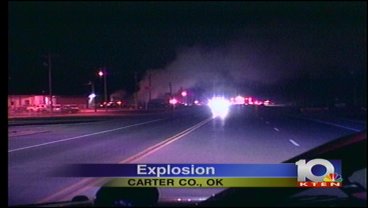 CARTER CO., OK - Emergency crews are still at the scene of an explosion at a Carter County business.

Authorities say the LW Environmental Services building on Highway 76, just outside Wilson exploded just after 7 p.m. Monday. The explosion occurred after the business closed for the night, so no one was in the building at the time. Several area fire departments were called out to the fire and worked together to get it under control.

Employees of LW say their company keeps propane tanks in their office building, and it's believed those contributed to the blast.

The building is a total loss and fire fighters were still on scene late Monday night to make sure there were no more hot spots. Several roads were blocked, but no evacuations were reported.

According to the companies website, LW Environmental Services formed in 1993 and specializes in "emergency response to environmental threats such as hazardous spill and responsible maintenance for the oil and gas industry."

Stay with KTEN News for the latest developments.