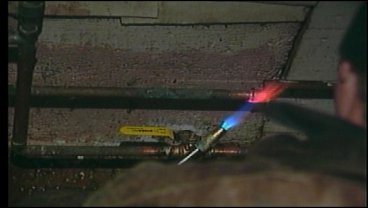 Homeowners weren't the only ones dealing with broken pipes thanks to that bitter blast.  A pipe at the Kroger's in downtown Denison froze and broke Monday morning.  Plumbers came in and shut water off to the store for several hours while they fixed the break.  Life is anything but normal right now for plumbers Dwayne and Tim from Allen's Plumbing in Denison.  Dwayne Carter said, "I got eight calls still to do.  All are water leaks."  One of those calls on Monday came from Bob Stoolfire, who spent the day surveying the damage at his girlfriend's house.  Stoolfire said, "Eight o'clock last night as Cathy was driving home from work, she called me and said there was a lot of water running down her street and she hoped it wasn't her house."  But it was.  Stool fire continued, "She ran out in front and turned off the water.  And, so, I called the plumbers and they're here now.  Dwayne and Tim got right to work fixing the broken pipe.  Just look at the damage it caused in the bathroom.  The water then cascaded right out this side door.  It continued down this breezeway and ended up running down the driveway, causing a wet, icy and ultimately expensive mess.  Dwayne said, "Somebody now just spent $300, the call I was just on, to fix a line that busted up in their attic.  So, you're lookin' at $200-$300 minimum."  Allen's Plumbing reported working more than 24-hours worth of service calls over the weekend, nearly double what they do on a normal weekend.  And it was the same story with every other plumbing company we talked to Monday morning, from Ada, OK to Van Alstyne, TX.