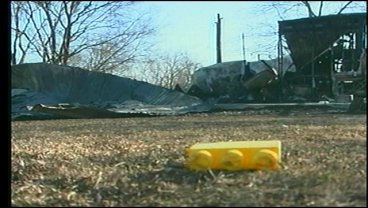 WOODVILLE, OK -- A 5-year-old boy woke up to fire in his home and proceeded to shout and wake the rest of his family, alerting them all to the blaze. Gary Zimmerman, Texoma Fire Department chief, said firefighters were notified by 911 of a house fire in the Woodville area near Lake Texoma Lodge. He said the circumstances could've been much worse had the young man not had the presence of mind to shout fire early Monday. "If it wasn't for this young man, we'd have a house full of dead people," he said.  At least four others in the double wide, two trailers put together he explained, made it out with the young man before flames ate away at the building and burned it to the ground in a matter of minutes. "Those trailer homes, they go up like a matchbox," Zimmerman explained, saying the people "just barely" got out of the homes with their lives.

Texoma Fire Department volunteers were there within minutes of getting the call, but it was too late to save the home. "We're just glad to see everyone got out," Zimmerman said. The occupants of the home have been given the contact numbers needed to secure a warm place to stay while they sort out the pieces. They had no insurance on the property, Zimmerman noted.