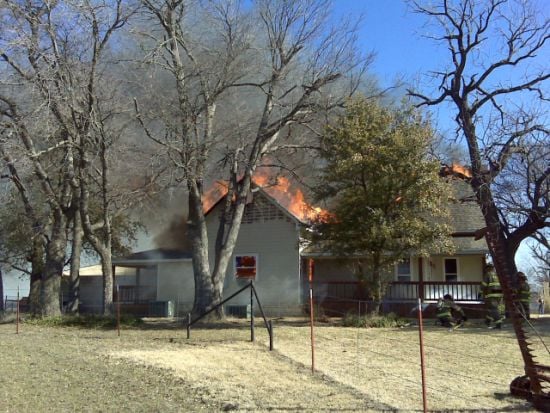 SHERMAN, TX -- Firefighters from Sherman, Bells, Whitewright and Tom Bean were called out to a fully involved fire at a home off Crews Road east of Sherman along Ida Road. Firefighters reported they could see thick black smoke up to a mile away. On scene, they found the home to be engulfed in flames and a defensive battle was called for. A tanker truck from Tom Bean brought thousands of gallons of water to the scene, as there was no nearby water supply, but flames had already made their march into the home through the attic area. Firefighters were still on scene into the late afternoon keeping a vigil on what remained of the charred home, and keeping the remaining flames from spreading to nearby property. Nobody was home at the time of the blaze and nobody was hurt in the fire. The investigation into the cause of the fire is under way.