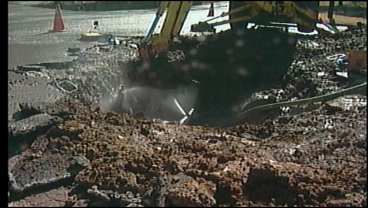 DENISON, TX --  Thursday, nearly century-old water main lines in Denison began to crumble and burst through the streets, providing a fountain of water which turned into an icy mess.  KTEN's Chris Severy reports.

Crews were at work throughout the day on at least three major water main breaks.  This is video from Main and Maurice in downtown Denison this afternoon where the water began gushing just before noon creating a loss of water pressure in the area and a slippery mess on the roadway.  At times earlier Thursday the water shot several feet in the sky as the crews worked to fix the broken pipe.  A Denison public works crew dug a hole several feet deep and several feet wide.  They used a backhoe to keep the water from turning into old faithful.  As they worked, water was pumped out and cascaded down Main Street, forming piles of ice in places.  But this wasn't the only trouble spot.  Three different water main breaks in the same day.  The city of Denison does have a crew on standby around the clock to respond to these water main breaks.  They expect to be pretty busy these next few days until it warms up.