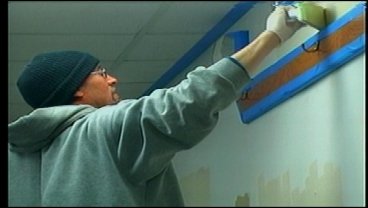 City Manager JD Spohn says he talked to the heads of all the city departments a few days ago.

That's when they decided if the temperatures dropped, their employees who normally work outdoors, would instead work indoors.

With temperatures in the teens Thursday in Ardmore, city employees were given jobs in the warmth of their offices.

Kevin Boatright, the Director of the Ardmore Parks and Recreation, tells me his department has an "Inclement Weather Plan".

They keep a running list of things that need to be done indoors.

Things like painting their office, that hasn't been painted since 1997.

And indoor days like this, actually help the department save money!

Boatright says, "I think it helps us save money because again when we're doing painting and sometimes minor renovations on facilities that we can do ourselves.  That's something that we don't have to pay a contractor to do and we can do it cheaper in house."

Boatright says there are a few things they must do everyday despite extreme weather.

Like checking the park's bathrooms and making sure nothing has been vandalized.

But for the most part, they prefer to keep their employees out of these extreme temperatures and indoors as much as possible.

Boatright did say their "Inclement Weather Plan" works out well, as long as the severe weather, doesn't over stay it's welcome!