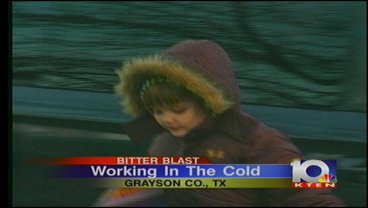 GRAYSON COUNTY, TX -- Temperatures remained below freezing Thursday, but local residents, both young and old, braved the cold to complete their daily activities whether they had to work or they had to go to school. Deeda Payton reports.

Earlier this morning, Denison kids bundled up to get to class on time while some other area schools announced a delayed start.

Sherman Superintendent, Doctor Al Hambrick, says the cold weather didn't stop his district from starting on time because he says his districts roads were fine this morning, but he takes it one day at a time because weather can change.

And, school kids weren't the only ones who had to brave the cold, so did some dogs. Animal Control says they are also braving the cold responding to a number of welfare checks for neighborhood dogs who are kept outside to make sure they have food, water and shelter.

Sherman sanitation workers, though, were lucky enough to be able to stay in their vehicles today as they made the rounds. They didn't even have to get out of the trash truck to empty local cans.

If you have to be outside, keep in mind that if the wind chill is at minus twenty for thirty minutes you could risk getting frostbite. To check your wind chill go back to our home page and click on the radar, we have the wind chill temperatures listed.