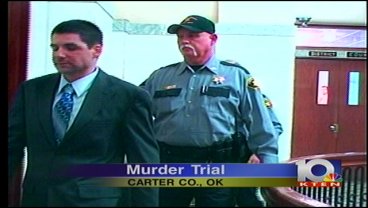 "On behalf of the District Attorney's Office and Connie Griffith's family, we are deeply appreciative of the jury's service and certainly agree that their verdict was supported by the evidence offered at trial.  The investigation which led to the prosecution of this case involved a joint effort of the Healdton Police Department, the Carter County Sheriff's Department, O.S.B.I., the M.E.'s office, and Investigator Marc Sanders of the District Attorney's Office.  These agencies, especially the local agencies, worked exceptionally well together and should be commended.  I am pleased with the outcome of the trial and feel that, through their verdict and sentence, the jury sent a stern message to perpetrators of domestic violence."

It was day two of the Shaun Haslacker murder trial in Carter County.  Meredith Saldana was there and has more on this developing trial.

The jury spent all day in the court room listening to testimonies as they try to decide whether or not Shaun Haslacker is guilty.

Haslacker was booked into the Carter County jail in November of 2008 for first degree manslaughter and was held on a 1-million dollar bond.

Tuesday, he appeared for the second day of the murder trial at the Carter County Court House, claiming he's innocent.

You may remember the death of Connie Griffith back in August of 2008.

When Healdton Police arrived, Griffith was found unconscious and bleeding.

She was rushed to Mercy Memorial Hospital where she later died.

The medical examiner's report confirmed his suspicion after stating that Griffith died of -blunt force trauma- from fatal injuries to her head, throat and abdomen.

The day after Griffith's death, neighbors told us they heard screaming coming from Haslacker's home that night, but not from the victim, but rather Haslacker.

Another neighbor told us he himself had been held at gunpoint by Haslacker in the months prior to this incident.

They're expecting to hear from the medical examiner and Haslacker himself.

We'll let you know as soon as a verdict is reached.