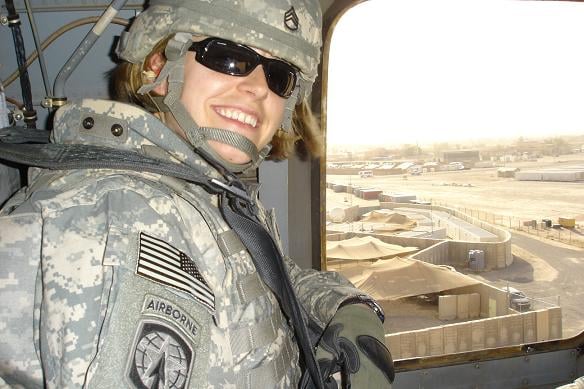 DENISON, TX -- She's a coach and a hero, not for winning games, but for fighting for our freedom. Deeda Payton has more on Staff Sergeant Brooke Brittain.

From the battlefield to the basketball court, Staff Sergeant Brooke Brittain just completed her second tour of duty in Iraq. "I grew up just loving the military every time I saw a soldier I just felt so proud of them and I want to have that pride in myself."

Now she is back fulfilling another duty, Assistant Coach for Denison High School's Girls' Basketball Team and the team couldn't be happier. "Her coming back just wanting to be with the team that she has coached, not even being head coach or head JV coach, she just is there with the team," said Carly Brader.

As Brittain said "I'm so proud of them. I'm glad to be here no matter what role I'm in. "This is Brittain's third year coaching at Denison. Her teaching time was interrupted, though, when she was called to duty, not once, but twice. But, she never forgot her students as Kelva Thorton explains. "She's very special, she writes us when she's over there."

"She does a great job inspiring them and working with them not that the basketball court is anything close to the battlefield," said Katie Holley. But, Brittain says the battlefield is more like the basketball court than you would think. "Sometimes you gota laugh, sometimes you gota yell, there are similarities that help me fall back into place when I got in to coaching here."

Fellow coaches continue to be impressed by her attitude and accomplishments. "When I got here they said you're going to have an assistant coach, but she's in Iraq and I was so honored to have someone that's served our country and has the leadership qualities that she has." And, her students are just glad to have her back home. "She's probably the best coach I've ever had.