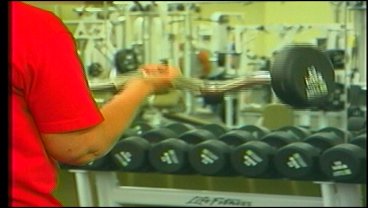 Working out and getting healthy is always a big topic at the start of a new year, but some residents in Texoma were already logging hours at the gym before 2010.

Two woman in texoma knew it was time to shed the excess weight, they say snuck up on them over the years.  So two strangers both joined the same gym the same day with the same goal in mind.  Now, both not only share the same birthday, but both have lost a total of 120 lbs. They say they could not have done it on their own, that's why they hired trainers to get the job done right. Now, both women have each lost a life changing 60 lbs.

Charlotte Hill, a member of Aspen Fitness in Sherman, says she had health problems due to her weight gain. "I was having stomach problems.  I was going to the doctor all the time and they were giving me all sorts of tests to figure out the problem."  Chris Farley, a member of Aspen Fitness, found herself in the same position. "I gained so much weight, I couldn't walk.  My feet had heel spurs really bad and I needed cortisone injections."

After viewing their doctor's bills and being unhappy with what they saw in the mirror, both new it was time for a change.  Aspen trainers Kristian Merrell and Anthony Boling both say, "80% of weight loss is through a healthy way of eating."  They add, "A lot of people think if they want to lose weight they shouldn't eat as much, but the body is opposite of that.  It's not a diet it's a lifestyle change."

With hard work and dedication, these women lost 60 pounds but both say they are not finished.  "I am looking beyond it, I am looking to lose a total of 100 lbs," says Charlotte.  Chris also has future goals, "I want to lose 20 more pounds."

Since the weight loss, Chris can now walk and run and no longer needs injections in her feet and Charlotte is off all of her medications.