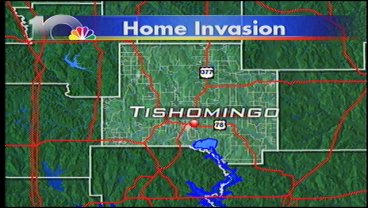 TISHOMINGO, OK -- A Tishomingo homeowner is injured after an intruder forces their way into her home. The incident happened around 9:30 a.m. in the 300 block of West 22nd Street.

Tishomingo Police say a man wearing a black ski mask forced his way through the front door and assaulted the homeowner who was trying to prevent him from entering. The homeowner suffered minor injuries to her face and back. She was taken to a local hospital as a precaution, but released a short time later.

Police say the intruder fled after assaulting the homeowner and at this time they are unable to release any suspect information. If caught, the suspect could face burglary and assault charges. The crime is still under investigation.