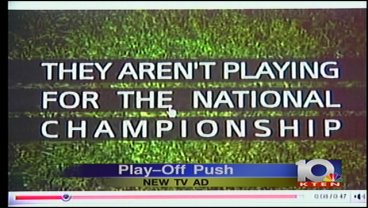 It's an issue very close to a lot of Texomans' hearts - college football. No matter your allegiance a lot of college football fans can agree on one thing - they'd like to see a play-off system instead of the current bowl championship series.

A big push for a play-off system comes this week as two undefeated teams were left out of the National Championship Game. TCU and Boise State, both undefeated, played Monday night in the Fiesta Bowl.

A new political action committee, Playoff PAC, plans to run a TV add all week leading up to the National Championship Game on Thursday between Texas and Alabama. The ad will air in Dallas, Salt Lake City and Boise, Idaho markets.

The ad highlights the fact that TCU and Boise State are not getting a chance to play for the title. The ad also includes comments from Bill Hancock, the executive director of the Bowl Championship Series, saying not everyone can play in a championship game.