Oklahoma Troops Could Deploy to Afghanistan in 2011 - KTEN.com - Texoma news, weather and sports

Oklahoma Troops Could Deploy to Afghanistan in 2011 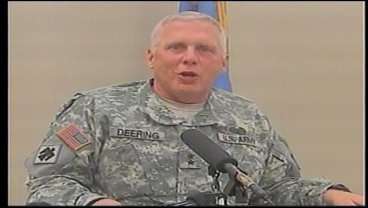 OKLAHOMA--Its news that could affect thousands of Oklahoma National Guard soldiers--today officials in Oklahoma City held a news conference -- saying deployment to Afghanistan for Oklahoma soldiers could begin in 2011.

But as for exactly who would go, at exactly what date, what they would be doing, and when they would come home, national guard leaders asked for patience, because they really don't know.

Back in 2007 members of the 45th Infantry brigade were called up to serve a year in Iraq. At that time, it was the largest call up of the state guard since the Korean War.

There are about 3,500 enlisted, many of those based in Southern Oklahoma including the 345 Transportation Unit in Ardmore, the 12 45 in Madill and the first 180th in Durant and it's those men and women who say, they're ready when they do get that call.

If the deployment takes place, it will be the largest deployment of Oklahoma National Guard troops since 9/11. A final decision on the plans is expected to come next spring or summer.