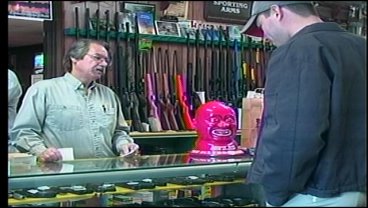 An idea, a proposal, no taxes on guns? If approved by Oklahoma lawmakers this next session it would remove taxes from gun sales one weekend out of the year. Meredith Saldana visited a local gun shop and has more on this story.

The idea is to have a "Second Amendment Weekend" much like our "Tax Free Weekend" in August, only this would be for gun sales.

Something a local gun shop says would benefit the consumer more than the store.

He's asking that fellow lawmakers approve the measure to make it law.

If approved, all shotguns, rifles and handguns would be tax free for a few days out of the year.

Harris says the tax free weekend may be just the incentive some shoppers need to purchase that gun they've had their eyes on.

And they might even spend the money they saved on taxes on other items in his shop.

But, some anti-gun activists say this tax free weekend could cause a rise in crime.

Something Harris says wouldn't be the case.

Shops like Jerry's Gun Shop are required to do background checks with the FBI before allowing someone to leave the shop with a gun.

"Anything that ends up in the hands of a criminal is usually either something that's bought on the street or at trade days or stolen from some place else."

A regular shopper at Jerry's told us he thinks a tax free weekend would help stimulate the economy and Harris says it's his regulars that would benefit the most.

"They would be the consumer that would buy something just to take advantage of the tax free weekend."