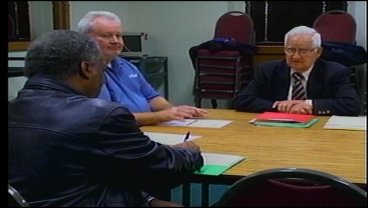 Talking your tax dollars in Ardmore, where a special meeting was held Wednesday to officially hire JD Spohn as the new City Manager.  Meredith Saldana was there and has more on this story.

Jd Spohn tells me he's excited for this opportunity and says the time he spent serving as Assistant City Manager helped prepare him for this new position.

Mayor Martin Dyer says the new contract for Spohn is for 2 1/2 years and calls for a base salary of $135,000, a car allowance and employee benefits.

Mayor Dyer says they chose to give the position to Spohn who served as Assistant City Manager under former City Manager Dan Parrott.

"We hadn't made any effort to try to replace him and he'd been acting as interim City Manager. He's done a very good job," says Dyer.  "Everybody likes JD and we think that JD will be a very good city manager."

Spohn says, "Well I'm excited about the opportunity and I've tried to prepare myself for it.  It was interesting serving as Assistant City Manager and getting involved in a lot of projects  discovering different aspects of city operations."

He simply said - quote - "I think we can handle it in the budget." end quote.

The mayor didn't break down the numbers or go into details of the budget with us.

As for Spohn's first item of business, that's to find a new permanent police chief.