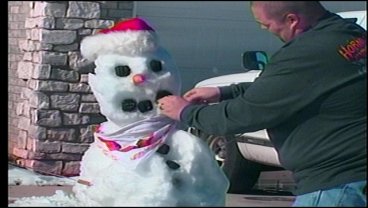 Winter weather is expected to hit Ardmore once again. Meredith Saldana took to the streets, Tuesday, to find out what everyone thought of the white Christmas.  She has more on how you can be prepared for what's to come.

Believe it or not everyone I spoke with loved the snow.

That is until they had to drive in it!

Ardmore resident, Jessica Darner says, "I loved it! It was so exciting to have a white Christmas!"

Claire Ocheltree says, "It was amazing.  It was like my first white Christmas. I loved it!"

The scene Thursday night, as drivers tried to make it to their final destinations for the evening, was a scary sight.

Cars sliding off the roads and in some cases into other cars.

Our Chief Meteorologist, Alan Mitchell, says Tuesday's snow won't be quite that bad but people still need to take precautions.

Oklahoma Highway Patrol Trooper, Ken Duncan says, "We're expecting the roadways to get bad again and so we'll be out trying to slow people down."

Fore says, "I think we were surprised that we got this much snow."

Abbey Darner adds, "All of our relatives came over and we played outside in the snow."

The winter weather has left a mess on the roads in Ardmore.

As the snow melts it's leaving wet roads and more snow is expected to fall Tuesday.

But people don't seem to mind too much.

"No, we look forward too it! It's fun in the winter," says Fore.  "We haven't seen this much snow since I was a kid."

Trooper Duncan says as of right now they don't plan to step up their man power for the snow expected Tuesday.

But, if it does get bad, he says it won't take long for them to have their guys out on the roads and ready to go.