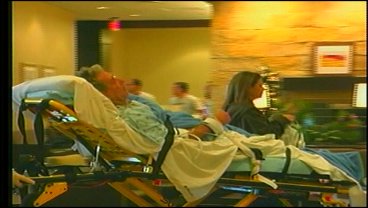 DENISON, TX -- The new Texoma Medical Center in Denison is officially open to the public and treating patients. Deeda Payton was there for the big move Sunday morning.

It's moving day at Texoma Medical Center. The plan is to move 70 patients from the old hospital off highway 91 to the new facility off highway 75 in Denison.

Patient safety is paramount especially when moving critical care patients. "The first thing I was worried about was the patient's safety moving from the old facility to the new facility."

EMS crews from across Grayson County are on-hand to make sure the process runs smoothly. "Everyone at TMC is working, rather at old TMC or new TMC."

So far, so good. "It's been going great, everything's been going smooth. We hadn't had a glitch yet so we're keeping our fingers crossed. We're ahead of schedule."

After five hours and 14 ambulances making multiple runs, the transfer is complete. "Every patient I've seen come in has been happy."

Now after months of waiting and watching, the $137 million new TMC is now the only TMC. TMC says they have completely vacated the old hospital on highway 91.