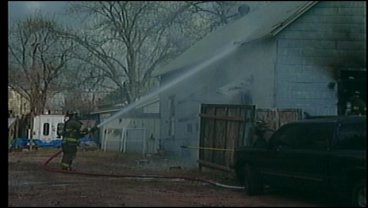 DENISON, TX -- Flames tore through a house in Denison Wednesday afternoon.  Three people at home at the time made it out safely, but the house was destroyed.

It happened at 227 Murray St. just before noon.  Denison Assistant Fire Chief Billy Ray says the people were at home when they noticed smoke and flames coming from a front bedroom.  They immediately called 911 and got out of the house.  Firefighters did keep the fire from spreading to a neighboring house, but could not save the one on fire.  It is a total loss.  The Red Cross is assisting the family.  The Fire Marshal is investigating the possibility a space heater could be to blame.