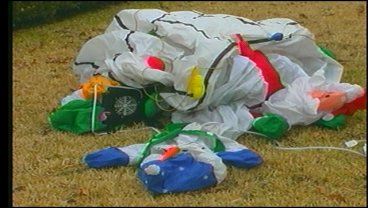 SHERMAN, TX-- Holiday vandals strike in Sherman. Deeda Payton spoke to a resident who had his family's yard decorations destroyed.

It's hard to imagine why anyone would take the time to vandalize someone's holiday decorations, but local police say it does happen a few times every year.

The McCraw family lives in the 2300 block of Monett Drive in Sherman. Over the weekend, their inflatable law decoration, which was a large igloo with a Santa and snowman that pop out of the top, was slashed and deflated.

They have several outdoor decorations and say it was the only one the vandals destroyed, but as Josh mcCraw explains, his family was upset when they walked outside and saw what had happened. "My mom was pretty upset. She loves Christmas and she's a really nice lady and she does a lot for other people and I'm just upset that it would happen to her."

They say their inflatable Santa decoration could probably be fixed, but they think it'll be cheaper to just buy a new one. Their neighbors all have their yards decorated for the holidays, but none of the decorations were tampered with. There is even an inflatable Santa across the street that is still on display.

Vandalism of Christmas decorations is classified by police as criminal mischief, but vandals are seldom identified or arrested.