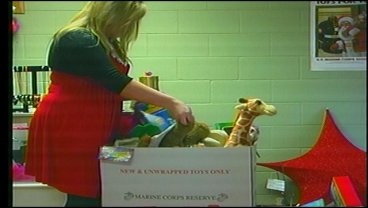 POTTSBORO, TX -- An ambitious 18 year old who started her own store is now giving back to the community. Deeda Payton spoke to her about the accomplishment.

Jessica Young is the 18-year-old owner of the Pink Zebra store in Pottsboro, but she's not just an entrepreneur, she's a philanthropist.

A few weeks ago, she decided to collect toys for a local charity and set a goal of 500 toys. Yesterday, she reached that goal and is happy that she will be able to give local children Christmas gifts this year. "I was motivated and I had a lot of people including my mom push me and they kept me on track." Her mother, Deanna Young, says "I knew she could do it. She has always done what she set out to do. I thought it was kind of high, but she really worked hard."

Young says she was blown away by local residents who came and donated toys and money to buy toys. She says one woman drove all the way from McAlester to donate 200 toys. Another local woman wrote her a check for $500 to buy toys for tots.

Many of the toys Young collected have already been picked up and are being delivered to local families. And, the toys she received from McAlester, she brought up to us here at KTEN and we are passing those onto families in Carter County through Toys for Tots.