Ardmore Students Collect 1,000 Pounds of Food for the Hungry 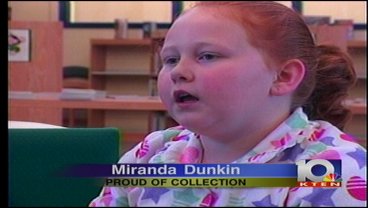 The Fifth Annual Students Against Hunger Food Drive, which benefits the Regional Food Bank of Oklahoma and it's partner agencies, raised nearly 171,000 pounds of food for those in need. And Carter County students alone raised 2,225 pounds!  Meredith Saldana met with some of the kids responsible for the donations and has more on this story.

Students at Charles Evans Elementary collected cans for just 1 week and were surprised to find out they collected more than 1,000 pounds!

These kids are becoming pretty familiar with helping others.

This week they're wrapping Christmas presents for other students in need so they'll have something to open on Christmas morning.

Their food drive was actually in October, but students at Charles Evans Elementary School just found out how much they collected to help other families in Carter County.

They say it's motivation to continue helping others.

Miranda Dunkin adds, "Because you can know that like you helped them and that they're not hungry or they've got what they needed."

More than half a million Oklahoman's struggle with hunger every day.

Making Oklahoma one of the hungriest states in the nation, ranking 6th in food insecurity.

And these young students were able to raise enough food to help serve about 750 meals and they say more kids should donate!

We asked her why she thinks this and she answered, "Because I think kids would have a really fun time donating and I think adults do it because they think that they should."

First grader, Avery Lowe adds, "When you serve other people it makes you feel good."