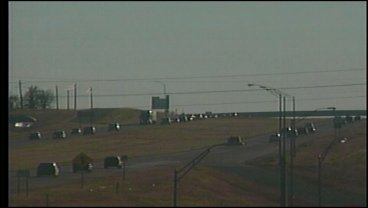 DENISON, TX --  More Americans will hit the road this holiday season according to AAA.  It's the first predicted increase in holiday travel in three years.  KTEN's Chris Severy reports.

Despite gas being nearly a dollar per gallon higher this year than last, about 77-million Americans are expected to pack up the car and head to grandma's house over the next couple of weeks.  One driver said, "My holiday plans are, I was given a trip to Mexico for a week so we're going to Riviera Maya."  OK, so not everybody is going to grandma's house, but the number of people hitting the road this holiday season will be up 4.4 percent according to AAA.  AAA Director of Travel Services, Glen MacDonell, says, "More Americans traveling during the winter holidays is another sign consumers are continuing to grow more confident in their personal financial situations."  Tell that though to the Texomans we talked to.  "Cash flow's always an issue.  Gas is expensive."  "We just don't want to get out and travel and put up with the crowds.  Stay home, save a little money on gas and have relatives come in town."  "We're just going to stay in town, have some friends come down from Tulsa, some family."  The number of people traveling by airplane is also expected to rise 2.9 percent to 4.2 million.  Americans are expected to spend about a thousand dollars per household to travel during the holiday period.