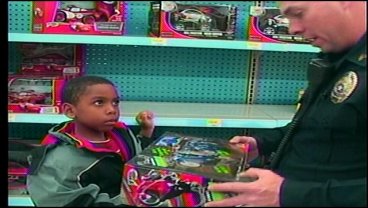 Some Ardmore children had a Christmas to remember.  It was the annual Shop with Cops event the Fraternal Order of Police puts on to make sure these children have a memorable Christmas! The FOP raises money all year for this event.  Meredith Saldana has more on this story.

For most people, Christmas lights are a sign of the holidays.

A symbol of togetherness, happiness and hope.

But a special group of Ardmore kids say it's a different set of lights that are a sign of hope and the Ardmore Police Department's annual Shop with Cops!

Briante Epps was one of the fortunate children taken on a shopping spree, "Well, it's nice how they would spend $100 on each kid like here for people who really don't have enough money to shop."

It's an event these children look forward to every year.

"I got a lot of stuff. I got a basketball, a remote control truck, a Sorry game board."

The cops take the kids thru isles and isles of toys.

And the children get to pick what they want for Christmas.

All while spending time with Ardmore police.

Epps says, "Kinda cool cause after they're buying you all this stuff you kinda forget they're cops!"

Dominguez adds, "The coolest part was I got a whole bunch of toys!"

A mother says she's especially thankful, "I'm so happy and I'm so glad they help. Especially you know the single moms like me. I appreciate you do that so Merry Christmas!"

While it's special to these children, it's also special for those who volunteer.

Chelsi and Kyleigh Norris' dad is an officer and they volunteered to help out!

Chelsi Norris says, "I think the best part is knowing that we helped people who don't get as much as they need and we can help them get what they want for Christmas."

The Ardmore Police Department also wanted to thank the other volunteers, students at SOTC and the wives and children of officers who helped out!