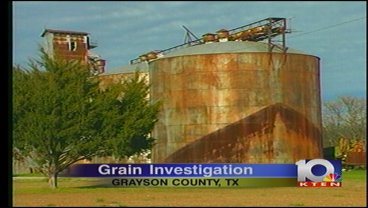 SHERMAN, TX--Several farmers across Texoma could stand to lose millions of dollars after bushels of grain at a storage warehouse in Sherman reportedly went missing. Michelle Gillespie reports. Now, state authorities are investigating the Dorchester Grain company who owns the warehouse.

It's an investigation that has hundreds of farmers in Grayson, Fannin and Collin County worried about their very livelihood because several of them stored their crops in warehouses across Texoma. Warehouses that were managed by Dorchester Grain.

Back in early November, a state inspector noticed what the Texas Department of Agriculture, or TDA, called serious issues at the Dorchester Grain warehouse in Sherman.

TDA officials can't comment on the nature of those issues as the investigation is still on-going right now. But they did hold a meeting tonight at the Grayson County Courthouse, to educate and inform hundreds of local farmers of how they can take action.

Tonight, a TDA official, Rick Garza, explained to local farmers that Dorchester Grain is no longer in control of the seven warehouses that they have across Texoma--in places like Sherman, Whitewright, Tom Bean, among others. Instead, the company's license is now suspended and tonight, Garza told folks that the two options for the company are either to declare bankruptcy or sell the warehouses to someone else.

Garza explained tonight that if Dorchester Grain were to declare bankruptcy, the bushels of grain and crops that still remain in the warehouses, would be liquidated, and the funds split up among the farmers who deposited their crops there. That would mean a huge financial windfall for many of those farmers though. But if a different owner were to come in and buy the properties from the grain company, the farmers would have a better chance of getting some of their money back.

Tonight, Garza explained that he plans to work with every single farmer and depositor who had grain stored in any of the Dorchester Grain warehouses across Texoma. He asked that each depositor provide him with a copy of their receipt or claim ticket so that Garza and investigators can try to figure out who owned what, in each warehouse.

Garza asked all in attendance at tonight's meeting to contact him directly in order to discuss each farmer's situation.